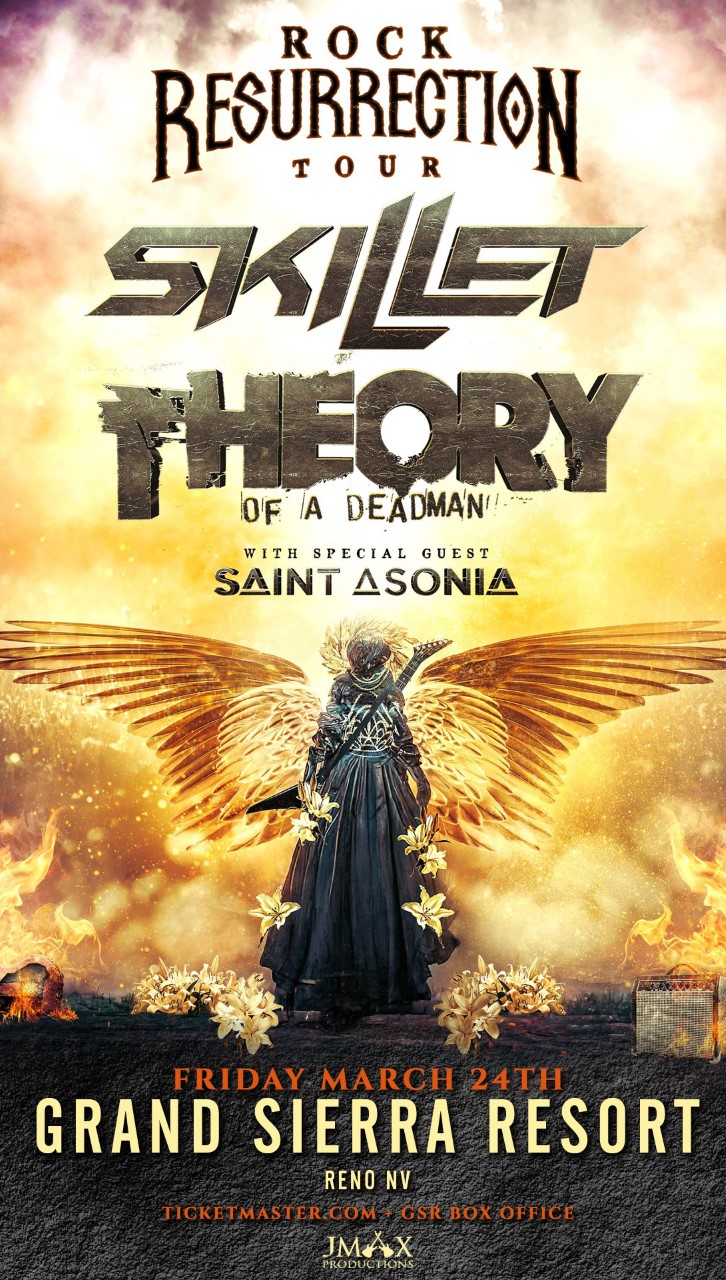 Theory of a Deadman

Skillet recently made headlines when their last album, Awake, became one of just three rock albums to be certified platinum in 2012, forming an improbable triumvirate with the Black Keys’ El Camino and Mumford & Sons’ Babel. The news that Skillet had sold more than a million albums in the U.S. came as a shock to all but the band’s wildly diverse horde of fans, male and female, young and old—known as Panheads—whose still-swelling ranks now officially number in the seven-digit range. This remarkable achievement was announced just as Skillet was putting the finishing touches on their eagerly awaited follow-up album, Rise (Atlantic/Word).

Unwilling to stand pat or rest on their laurels, the band—lead vocalist/bassist John Cooper, guitarist/keyboardist Korey Cooper (John’s wife), drummer/duet partner Jen Ledger and lead guitarist Seth Morrison, making his first appearance on record with Skillet—continue to explore new terrain on Rise, expertly produced by Howard Benson, who previously helmed the mega-successful Awake. Eager for new challenges, Cooper threw himself into collaborative songwriting to a far greater degree than ever before, co-writing the uplifting title song and the lacerating first single “Sick of it” with Scott Stevens, founder/leader of the L.A.-based Exies, while teaming with Nashville songsmiths Tom Douglas and Zac Maloy on the timely and anthemic “American Noise,” which Cooper considers to be the strongest song Skillet has yet recorded. On “American Noise” and the joyous “Good to Be Alive,” the band explores new stylistic territory, bringing an element of heartland rock into their aggressive, theatrical approach. The band expanded their musical palette, integrating natural, acoustic instruments like accordion, mandolin, dulcimer, harp, tympani and bells to their trademark slashing electric guitars, strings, churning synths and pummeling drums.

It isn’t just the songs themselves that make Rise so gripping, it’s also the song sequences—like the radical contrast between the almost unbearable tension of “Sick of It” suddenly giving way to the ecstatic release of “Good to Be Alive,” or the way the closing three-song progression of “My Religion,” “Hard to Find” and “What I Believe” builds to a thrilling musical, thematic and emotional crescendo. Clearly, these songs and the album as a whole are embedded with an impassioned overarching message. This message courses with a tidal pull through Skillet’s entire body of work, but on Rise, it’s artfully woven into a gripping coming-of-age narrative. This sprawling work stands as the band’s first concept album—though it wasn’t premeditated.

“The narrative idea happened after we had 10 or 11 of the songs chosen,” Cooper reveals. “As we were recording them, we started to realize that there’s something going on here—this album is really telling a story. Realizing that, I knew we needed to make it as powerful as we could.” The result is a wildly ambitious work as heady as it is visceral.

“Rise is the story of a typical American teen coming into adulthood and facing the massive world problems,” says Cooper, who is deeply concerned about the erosion of belief in young people today, as well as their deeply felt desire to belong. “Facing world problems as an adult is different from when you’re growing up and under someone else’s care. All of a sudden, you realize that the world is a dangerous place. It’s dark and scary, there’s acts of God happening, there’s war, there are all these terrible things, and you thinking, ‘How can I have hope in this place?’ But at the same time, you also think, ‘Even moving all those huge problems aside, I look at my own life and I’m not even comfortable with the things I can change. I’m fighting with my parents, my parents have split up, I’m here in this home getting yelled at all the time that I’m never gonna be good enough, and I’m starting to believe that I’m never gonna be good enough. I constantly fail myself, and I just want to have a reason to live. I want to matter, and I want to know that my life counts for something.’ “

“So the story is basically about rising up out of your downtrodden life, rising up from that place where you feel like a failure, rising up to be comfortable being yourself, to stand up for what you believe in,” Cooper continues. “It’s not about pleasing your friends, it’s not about doing what’s cool; it’s about being who you are and being comfortable with that. And lastly, in the grand scheme of it all is, if I can be somebody I am comfortable being, maybe I can even rise up and help change the world. Can one person make a difference? Can one person actually matter?”

But there’s another key distinction between Rise and the band’s previous albums. “We've written songs about issues, but the reason this record stands out so much to me is that this is the first time that we're singing songs that use the word ‘we’ rather than ‘me,’” Cooper points out. “It’s not just my feelings, these are our feelings. We can do this. Even the title track is not about me rising, it’s about us rising. So this record feels inclusive of all kinds of people, and that’s unique for us. It’s a rallying cry.”

On Rise, then, the message is both spiritual and social, as Skillet reaches out anew to its ever-growing, ever-changing following. “I think music should be bringing people together and bringing them hope,” says Cooper. “That’s what music does for me.”