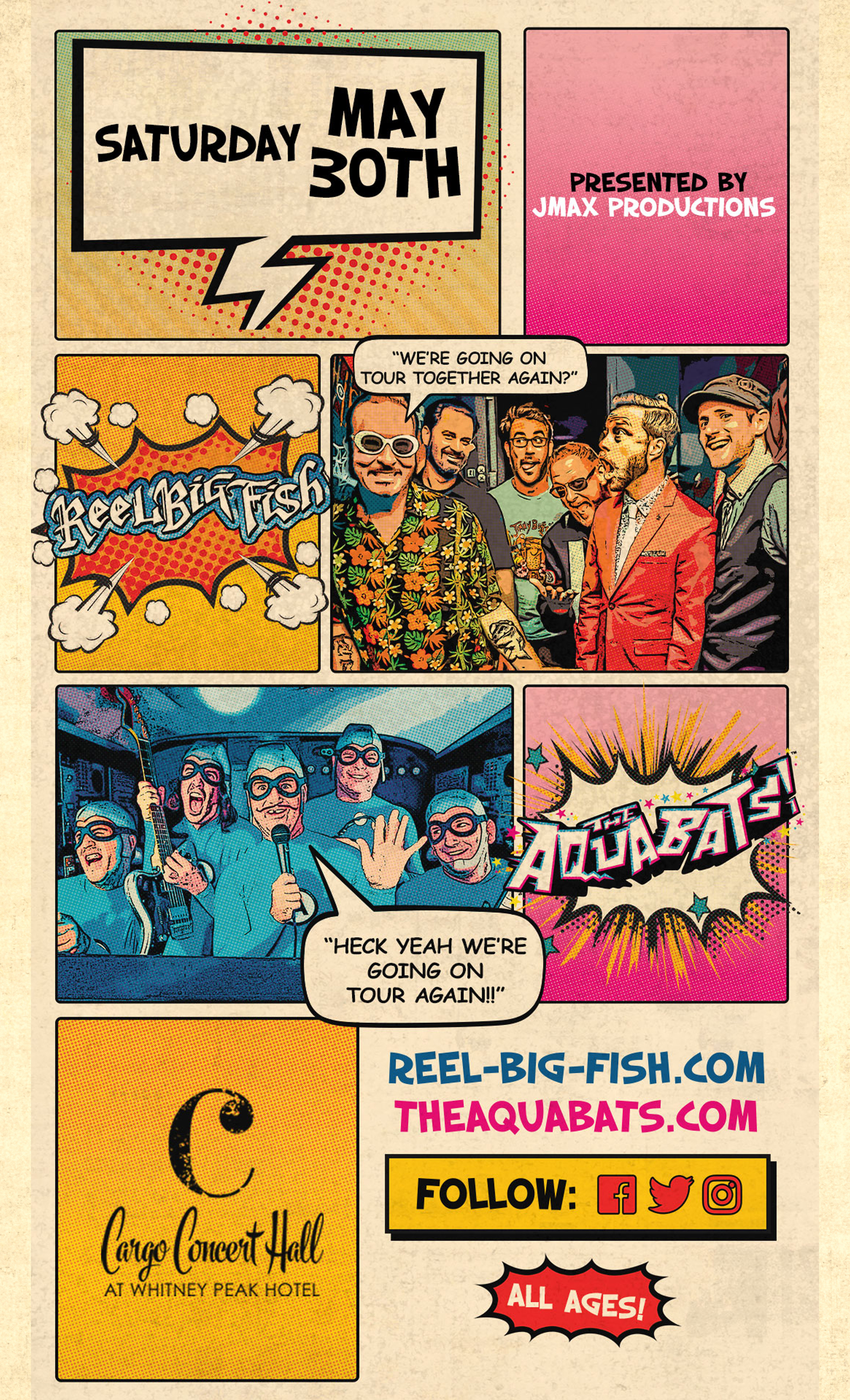 Reel Big Fish was one of the legions of Southern California ska-punk bands to edge into the mainstream following the mid-’90s success of No Doubt and Sublime. The band was distinguished by their hyperkinetic stage shows, juvenile humor, ironic covers of new wave pop songs, and metallic shards of ska. The group cultivated an underground following that broke into the mainstream in summer 1997 when their single “Sell Out” became a modern rock radio and MTV favorite. Their appearance in the movie “Baseketball” as the halftime band also gained them more fans and helped the band's popularity to grow. Still fronted by original lead singer and songwriter Aaron Barrett, they continue releasing albums and touring relentlessly, playing more and more countries and bigger venues all over the world.

Reel Big Fish recorded its self-released debut album, “Everything Sucks”, in 1995. “Everything Sucks” became a word-of-mouth underground hit in ska-punk and college circles, which gave the band enough leverage to sign with the indie label Mojo Records.

With the late-2018 release of the band’s 8th studio LP, “Life Sucks...Let’s Dance” (Rock Ridge Music) Reel Big Fish are finding themselves with a new focus and a renewed sense of purpose, as well as a-- dare we say it-- happier outlook on life.

Barrett says, “We started recording the album in January 2018 and really took our time with it. Our friend and engineer David Irish just finished building his new studio “Pot of Gold” in Orange, CA, and we loved how everything sounds there. There’s just really good energy and good vibes there, plus there’s a really adorable studio kitten named Iggy Fluff there, so we may have accidentally made a positive, happy record instead of a pissed off, hateful record, oops...well, there’s a little pissed off-ness in there and some sarcastic, funny lyrics as usual! Also, I just got married so there might be a few sappy love songs on the album too! Yuck!”

He adds, “Recording the album with this line up was really fun, we all get along really well these days and everybody was excited to make a new record. Everybody had lots of great ideas and really got creative with everything and I really think it shows.

The new single “You Can’t Have All of Me,” is a danceable sing-along, catchy, hooky good old Reel Big Fish song. We didn’t reinvent the wheel... We just painted more checkers on it!"

The long-running ska heroes, fresh off a summer-long stint on the final cross-country Vans Warped Tour, and appearances at Scallywag! Fest (with Bad Religion, Pennywise, Less Than Jake and The Interrupters) and Sammy Hagar's Hightide Beach Party, remain as popular as ever, as they continue to tour non-stop, playing over 250 shows a year to thousands of loyal fans all over the world, gaining more and more underground popularity as the Ska scene continues to flourish.