There are 18 tables, 8 bar seats and 8 church pew seats available for reservation. The remaining pew seats for this show are not reserved in advance. These seats are available on a first come/first served basis when doors open. Please note that you may be seated with persons outside of your party. 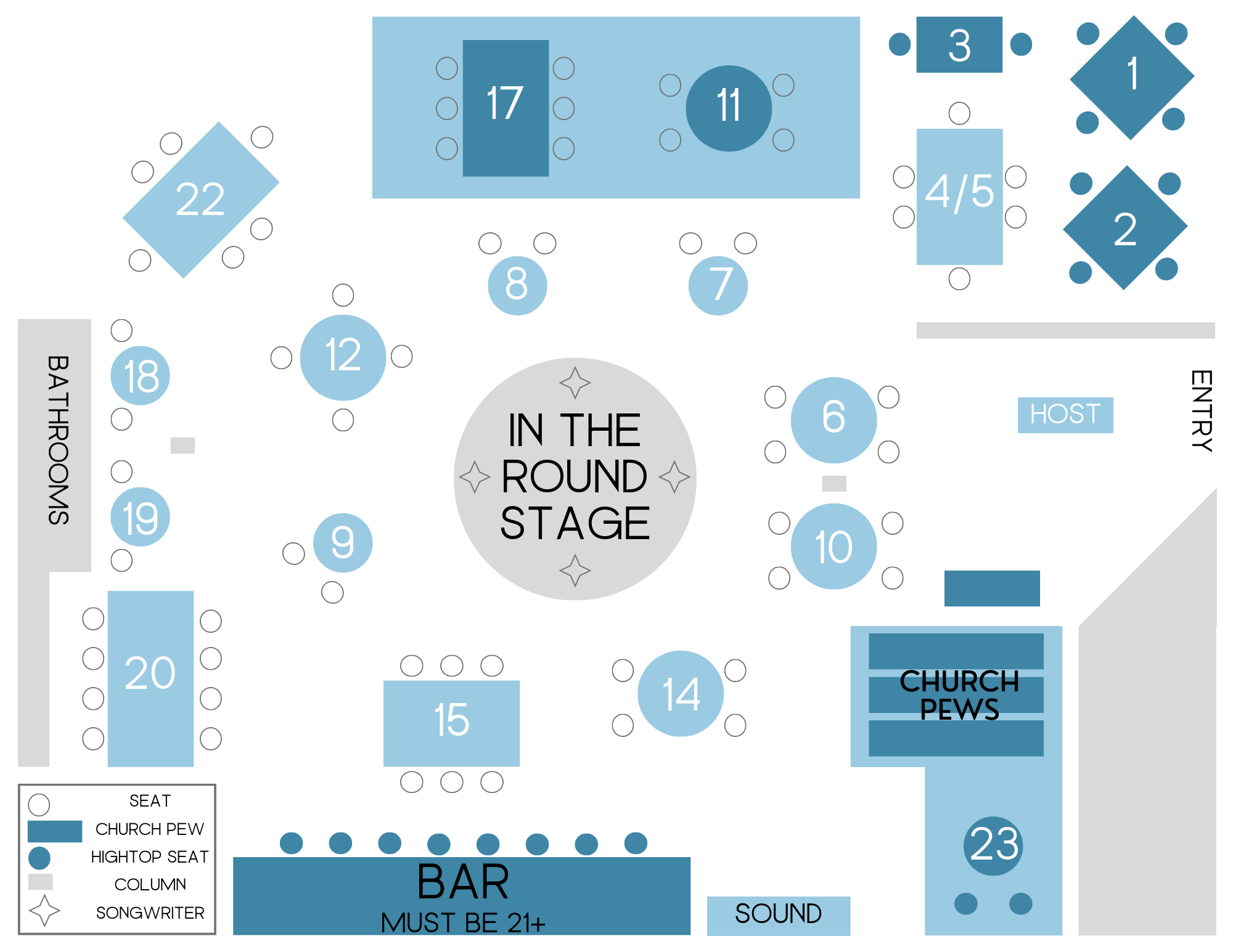 In The Round with Georgia Middleman, Tony Arata & Marcus Hummon

In The Round with Georgia Middleman, Tony Arata & Marcus Hummon

THIS IS A PREPAID SHOW, REFUNDS ARE NOT AVAILABLE

There are 18 tables, 8 bar seats and 8 church pew seats available for reservation. The remaining pew seats for this show are not reserved in advance. These seats are available on a first come/first served basis when doors open. Please note that you may be seated with persons outside of your party.

One of Nashville’s most accomplished singer/songwriters, Georgia has had songs recorded by Faith Hill, Kenny Chesney, Martina McBride, Reba McEntire, Terri Clark, Joe Nichols, Maia Sharp and Sheila E., among many others. In 2010,  Keith Urban took “I’m In,” which she co-wrote with Radney Foster, to the top of the country charts. Those who have seen her live, though, can attest that there is real magic in her own renditions of her songs as, she wraps one of music’s most expressive voices around lovingly crafted glimpses into life and love at their most compelling.

Born and raised in Texas, Georgia earned a degree in acting from NYU and played the city’s clubs until a visit to Nashville. “That’s when everything changed,” she says. “I fell in love with this town because it was a community of writers.”

She earned a publishing deal with Polygram and then a record deal with Giant Records. Her solo records include “Endless Possibilities” on Giant Records and the independent “Unchanged,”  “Things I Didn’t Know I Knew,” and “Plum.” Georgia just recently released on her fifth solo record, an acoustic collection of her most requested original songs called “Requests.”

When not performing solo, Georgia is one third of the trio, Blue Sky Riders, along with Gary Burr and Kenny Loggins.  Blue Sky Riders have recorded two cds on their own label, “Finally Home” and “Why Not.”

Georgia is also one half of the husband & wife duo, Middleman Burr.

Tony Arata was born in Savannah, GA and grew up on nearby Tybee Island. While studying for a journalism degree from Georgia Southern University, he began performing his original songs in local bands. In 1986, he and his wife Jaymi moved to Nashville where his unique, soulful style began to get the attention of people like Allen Reynolds and Garth Brooks. Garth, to date, has recorded seven of Tony’s songs, and “The Dance” won song of the year at The Academy of Country Music and received both a Country Music Association and a Grammy nomination, as well as a most performed song in Radio and Records Magazine.

Tony is a member of the Nashville Songwriters Hall of Fame (2012). He has also had No. 1 records with “Here I Am” for Patty Loveless, “I’m Holding My Own” for Lee Roy Parnell, and “Dreaming With My Eyes Open” for Clay Walker. Other artists who have recorded his songs include Dolly Parton, Emmylou Harris, Bonnie Raitt, Trisha Yearwood, Delbert McClinton, Don Williams, Reba McEntire, Suzy Bogguss, and Hal Ketchum.

Tony has also recorded four solo albums featuring new songs, covers, and guest appearances by many of Nashville’s finest musicians as well as folks who have recorded his songs, including Garth, Patty, and Lee Roy.

Grammy winner, and two-time NSAI Songwriter’s Hall of Fame nominee, Marcus Hummon has enjoyed a successful career as a songwriter, recording artist, composer, playwright and author. His songs have been recorded in many genres -Pop, R&B, gospel - and most notably in country music.

His best known hits are: ‘Bless The Broken Road’ (Rascal Flatts), ‘Cowboy Take Me Away’, and ‘Ready To Run’ (The Dixie Chicks), ‘Born To Fly’ (Sara Evans), ‘One Of These Days’  (Tim McGraw), and ‘Only Love’  (Wynonna). Several of his songs have been nominated for Grammys, ACMs and CMAs and Dove Awards. In 2005, ‘Bless The Broken Road’, won the Grammy for ‘Best Country Song’ (NSAI’s Best Country Song 2005 and 2007).  Along the way, he has garnered numerous BMI awards, including 5 #1 awards from BMI.